Myles Weiss – Reporting on the Mess in Greece

Greetings from sunny Athens where the clouds of economic insecurity hover over the entire area.

Today we had an amazing opportunity to be on the 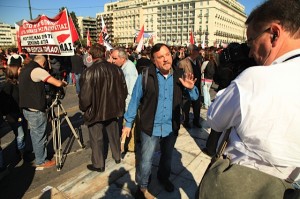 frontlines of the story unfolding here in Greece. The pilgrims with us for the Zola Tours journey accompanied Katharine and Sandra on a beautiful day touring the historical sites around Athens. The TV crew and I went to Constitution Square and taped the events that are rocking this country and garnering world attention.

As the crowds swelled to thousands of marching, disgruntled Greeks, the demonstrations illustrated yet another instance of the news headlines “catching up” to the Bible. The perplexity displayed here strongly pictures the fate of man without trust in God. We documented the evidence of Scripture prophecies 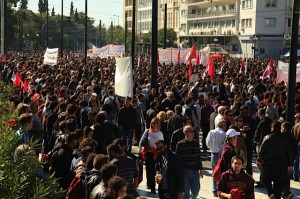 being fulfilled—we were actually in the midst of “wars and rumors of wars”—in this case, war in the heavens playing out on this earthly plane. Anger and grief permeated the demonstrators’ chants and saturated every interview.  Oddly though, no one could give a cogent account of how Greece fell into such disarray. There was blame galore (the government, the bankers, the president, greed, other countries), but no clear explanation of the current economic slide and certainly no solutions suggested!

Notably, when I asked various interviewees if they considered that there might be a 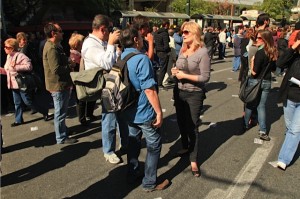 spiritual connection to the mess, I was met with blank stares and requests for clarification that could not be attributed to language barriers.

The folks on the street uniformly expressed a lack of interest in and connection to any spiritual relationship with everyday life. There is plenty of “religion” here: church buildings and historical documentation regarding the presence of Christianity, but no felt need to be personally involved with the Creator.

Like Athens of old, idols decorate shops on every corner and the Greek pantheon of gods can be seen everywhere as well. There is an eerie sense that time has stood still, and the issues that Paul faced in the first century are still prevalent in modern Greece. The “isms” of man have utterly failed, leaving the people without a human solution to their quandary.

It is very sad. Our guide wept when I prayed for her country. In an odd God moment, yesterday we happened upon a mime in the town square who was dressed in a full white 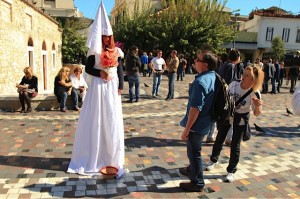 bridal outfit and standing on a pedestal. She was perched statue-still in that robotic way that many of us have seen in large cities around the world. As onlookers dropped coins in her basket, I was struck by how poignantly she portrayed contemporary humanity. She embodied the desire, the longing to be swept off her feet by a hero-groom and whisked away to his palace for an “ever-after” experience. I commented to my wife, the camera crew, and our guide that she was a clear picture of the situation in Greece and around the world … “all dressed up and nowhere to go.”

Without the Bridegroom of Heaven, we are lost.

This entry was posted in Myles Weiss and tagged Athens Greece. Bookmark the permalink.

5 Responses to Myles Weiss – Reporting on the Mess in Greece