On what day does Israel celebrate Halloween? Actually, Israel doesn’t celebrate Halloween. Yet Purim, the biblical holiday instituted in the Book of Esther, looks more and more like the American extravaganza of All Hallows Eve. The costumes become more grotesque and include the usual themes of witchcraft, hell, and death so prominent in Halloween’s imagery.

How did the joy and thanksgiving of Purim, which falls on March 8–9 this year, become perverted into the gross displays in today’s Israeli shopping malls and schools (kindergarten and up)? One obvious reason is that the media-driven pop culture has for decades been taking over in the biblically rooted nations of Israel and America. 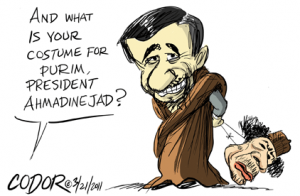 Yet, there is another cause of garish costumes and excessive gaiety, and it lies within the nature of the Festival of Purim itself. As instituted in the Book of Esther, the celebration commemorates Jewish victory over certain annihilation at the hands of the wicked Persian official Haman (think: Ahmadinejad).

Infuriated at Mordechai’s refusal to pay him homage in Shushan (think: Tehran), he ordered the extermination of every Jew in the Persian Empire, stretching in those days from India to Ethiopia. Persia was renamed Iran in 1935. How ironic that Jewish destruction is again being demanded from the same address!

Haman, however, was hanged on the gallows that he built for Mordechai, and Queen Esther became the heroine by revealing her Jewish heritage to King Ahasuerus (Xerxes). The Persian Jewish community received the right to defend itself and “had rest from their enemies.” To celebrate this dramatic deliverance, they made the 14th of Adar a day of feasting and gladness (Esther 9:17).

The biblical history of Israel contains many accounts of last-minute rescues. Whether it’s Moshe (Moses) & Co. watching the Red Sea drown Pharaoh’s chariots or Joshua blowing away the walls of Jericho with nothing more than shouts and shofars (horns), the Lord has a penchant for close calls. What brings such a smile and invites the parody at Purim is the utter and sudden reversal of Jewish fortunes. One moment we’re doomed, and the next we’re dominating. No wonder our people found ways to bring cheer and comic relief during the holiday through the centuries, especially in Europe, where oppression was common.

Thus, Purim became an opportunity to laugh at tragedy-turned-to-triumph through the satiric drama affectionately known as the Purim spiel, or embellished story. Costumed characters from the story of Esther re-enact the tale, often with absurd twists.

I don’t enjoy seeing skeleton costumes during Purim in Israel. But I love seeing my grandchildren and others masquerading as Mordechai and Esther. May these little ones identify with their biblical heroes and may our deliverance from the Hamans of today be as resounding as it was in Esther’s time.

Around the world, Jews raise children with the same Purim joy and costumes. Once again we see the Jewish people connected over space and time through our adherence to our collective story. God is the hero of Purim!

This entry was posted in Eitan Shishkoff and tagged Purim. Bookmark the permalink.