For Intercessors, blogs, and any who will heed 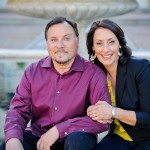 By Myles and Katharine Weiss

Shalom from the City of David’s greater Son!

We are in the ‘calm’ before the storm. The tour folks have dispersed, either to their homes or on to Petra. We have a day in Jerusalem to prep for the upcoming TV push.

We are fired up about using the TV opportunity to make the case for Israel as the legitimate home for the Jewish people. The Jews have a 4000 year old indigenous presence that is being written out of the public consciousness by the brilliant tactics developed for Hitler by Joseph Goebbels: tell a big enough lie long enough and people will believe it.

We are both fighting a chest/cough/crud from the humanity crush, but will be fine. It just weakens us going in to the 12 + programs we are about to film.

Not worried, but wouldn’t mind a healing!

Very excited about the series and the interviews … SO frustrated by the constant “nickel and dime” rocket attacks on the southern area of the Land. The obtuse reportage from the West is maddening. Politicians are seemingly shocked at the continual alliances between warring Islamic factions. The “genius” of Bin Laden and his ilk has been in overcoming the biblical prophecy about the sons of Ishmael and Esau—“that his hand would be against his brothers”—and uniting them against a common enemy, Jews and Christians, i.e., “infidels.”

We had a woman from a radically Islamic country on our tour. She is a Westerner whose husband has worked in said land for 7 years. She sparked many intercessory prayer sessions along the way with tales of horrific Muslim abuses ( including allowing an infant to die when the parents wouldn’t convert from Jesus to Islam!). Her testimony was of the price paid and the strength of local believers in these lands.

God help us in the West if we pursue the ways of Neville Chamberlain.

Islam is a fascist ideology with a religious overlay using democratic laws to  manipulate liberal countries into submission.

Look up hudna, taqiya, jizya, and dhimmi to understand what we are facing.

PTL He is saving souls all over the world and building His army, which wrestles not against flesh and blood.

Regards to the Zola Levitt Ministries community, Beth Shalom, and Beit Abba for standing with us as Esther with Mordechai!

2 Responses to For Intercessors, blogs, and any who will heed