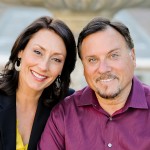 We interviewed Jan Willem van der Hoeven, of the International Christian Zionist Center. With the city spread out behind us, he passionately appealed to the worldwide community of faith to stand with Israel. Pastor van der Hoeven was discipled by Corrie Ten Boom, author of  The Hiding Place, and he has lived and worked in Israel for over 40 years. We (as well as bystanders!) were brought to tears by his heartfelt plea and exhortation. He called me “Jeremiah” and prayed that I would not water down the message of the hour. He laughed joyously when he learned that my given name is Mordechai.

We then filmed a program on the bloodlines of Isaac and Ishmael, and their relationship to the blessings of God on Earth.

All very exciting … and we are rounding the bend toward home. Only four more programs to film.

Tuesday was Katharine’s birthday, and producer Ken Berg and TV team Bill Elliott and Ken Waller gave her a beautiful and unexpected gift of pearl earrings!

Keep us in your prayers; there is still more to do!