In Earth as it is in Heaven

As worlds collide and barbarism clashes with civilization, the Lord continues to verify His prophetic Word. I tell congregations, “The headlines are catching up to the Bible.” Only the Tanach (Hebrew Scriptures) and the Brit Hadashah (New Covenant) p

rovide an accurate understanding of what we are seeing on planet Earth.

The trickle of Jewish Believers has become a flood. The issue of Yeshua’s Messiahship is no longer the shondah (shame) that it was for us Jews growing up in 1950s’ New York City. The unthinkable is now debatable. In fact, it is hotly debated by Jews in Israel and worldwide. Controversy has always followed Jesus, at least on mankind’s part. Is He Lord? Liar? Lunatic? Was He a good man … just a “prophet”… a nice rabbi? Many of my NYC neighbors believed he was a nice Jewish boy who became a Catholic!

These controversies surround Him—during His earthly ministry and even following the universe-altering events at the cross.

Certainly the archaeological discoveries that continually arise—literally out of the graves of antiquity—offer the most fascinating and reliable settlement to any controversy. Genuine artifacts inscribed with Hebrew notations, carbon-dated and scholastically cross-verified shout out the truth of the Bible and the Chosen People.

Yet Islamic ideologues attempt to rewrite history in the popular press and spread their fables orally among their (sadly) all-too-illiterate minions. Their pathetic yet shockingly effective lies ally Muslims to—God have mercy—self-identified and well-meaning Christians who unwittingly undermine the Author of the greatest autobiography ever written. 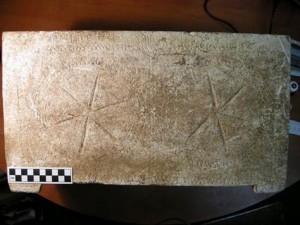 The ossuary thought to reveal the home of high priest Caiaphas' family.

God says what He means and means what He says. His story, exactly as He authored it, is told in Scripture and unearthed in His Land, layer by layer. The tels (archaeological digs) tell the tale (See the article Ossuary Yields New Detail of Gospel Story on p. 11 of the September 2011 Levitt Letter at http://www.levitt.com/newsletters/2011-09.pdf).

Recently, more truth about David Melech Y’israel(David, King of Israel) has been unveiled. Articles abound in scientific and popular journals about the king who is the ancestor of the King (see Biblical Archeology Review). One scorching debate takes place in the venerable National Geographic (Volume 218, Number 6, page 67), where Jewish archaeologists take sides in the debate about the Book and its veracity.

King David is a favorite target for defamation because his life establishes many vital truths:

David is the writer of many of the psalms that Christians and Jews read as among the most genuine dialogues between man and God. David embodies our humanity on Earth, reaching for the skies. Our series Psalms of Ascent creatively displays that relationship.

God formed man from earth; now He is unearthing irrefutable evidence of His-story.

This entry was posted in Myles Weiss and tagged Biblical Archeology, Myles Weiss. Bookmark the permalink.

One Response to In Earth as it is in Heaven