To ensure that our pilgrims receive all the spiritual input they need, we take time at this ancient site to draw distinctions between the Roman worldview and the biblical paradigm.

Folks wept as Myles recounted the cost that Yeshua paid for our eternal salvation. 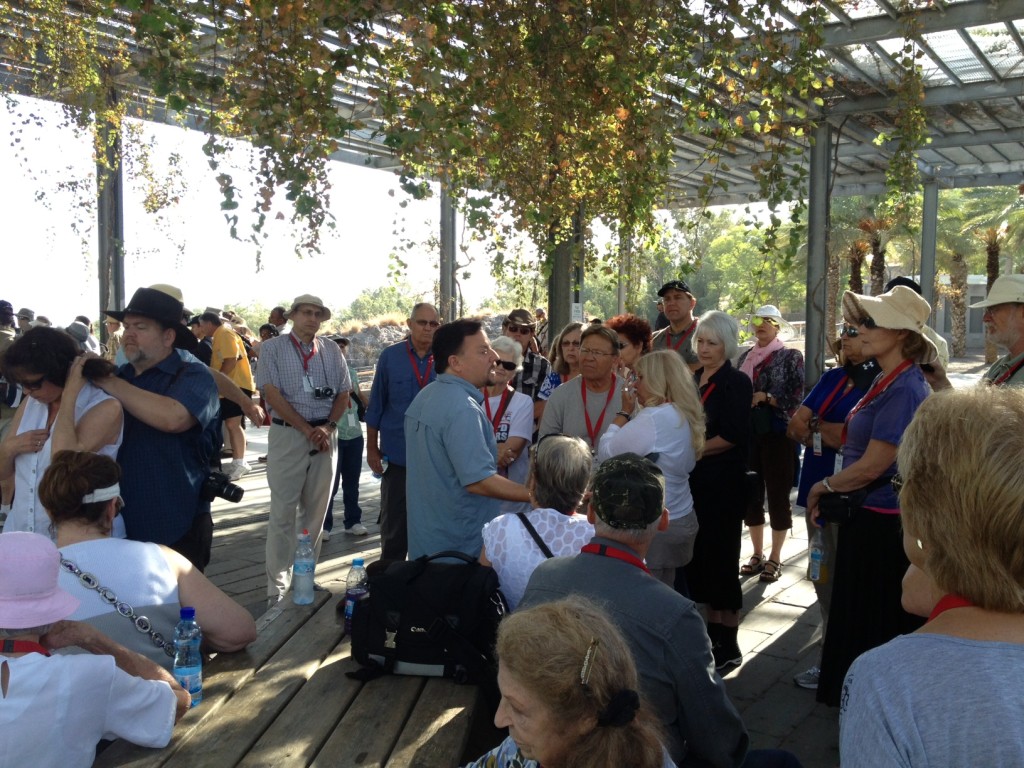 Beit She’an, a city in the North District of Israel, has played an important role historically due to its geographical location at the junction of the Jordan River Valley and Jezreel Valley.

A tour of Beit She’an is like a walk through time. Among the residential buildings, modern public buildings, and modern shopping centers sit ancient buildings that were once public institutions, archaeological sites, and impressive ruins. Beit She’an is one of the most ancient cities in the country. This historical gem unfolds the fascinating story of a rich period full of changes, climaxing in the National Park of Beit She’an to the north of the city.

Tel Beit She’an — tel (the Hebrew name for abandoned ruins that often appear as hillocks in the countryside) — was first settled in the Chalcolithic Period (some 5,000 to 6,000 years ago). The city has had many conquerors, among them the Egyptians some 3,500 years ago. A few hundred years later, the Philistines conquered it (it was they who fastened Saul’s body to the wall of Beit She’an after the famous battle on Mount Gilbo’a: 1 Samuel 31 .8 – 11). Beit She’an became part of the kingdoms of David and Solomon, and was eventually destroyed in a fire, apparently at the hands of the King of Assyria (in 732 B.C.).

Beit She’an was rebuilt as a Hellenistic city about 2,300 years ago, and was renamed Scythopolis (“City of the Scyths”). In the succeeding Roman period, it spread south, reaching the peak of its greatness in the fifth century A.D., when it had 30,000 – 40,000 inhabitants. The remains of this magnificent city can be clearly seen at the National Park of Beit She’an, one of the country’s most beautiful and impressive national parks. Tel Beit She’an in the northern part is the ancient Beit She’an. To the south and east are the ruins of Roman-Byzantine Scythopolis, which tell of its richness and greatness.

The city extended over an area of some 370 acres, and you can still see the remains of the wall that surrounded it. In addition, several impressive buildings have been uncovered in the national park, including a theatre (still used for events and shows), a public bath-house (the largest found to date in Israel), two magnificent colonnaded streets, a Roman temple, a decorative fountain building (nymphaeum), a large basilica marking the center of the city, and the reconstructed mosaic that depicts Tyche, the Roman Goddess of Good Fortune, holding the Horn of Plenty.

The city remained at its peak for several more years. After the Arab conquest, it sank to the status of a small town. Upon the establishment of the State of Israel, it was resettled and new immigrants came to live here. Today, the city numbers some 18,000 inhabitants.

As mentioned, there are more ruins within the precincts of the new city of Beit She’an, including a Roman amphitheater (hippodrome), an affluent person’s residence from the Byzantine period, and the remains of a Roman-period bridge on Nakhal Kharod, which flows at the outskirts of the city. In another part of the city, ruins from later periods include the remains of a Crusader fortress, a mosque from the Mamluk period, a Turkish government house, and several basalt-stone houses from the time when Beit She’an was under Arabic rule.

The area surrounding the city is profuse with springs and, consequently, there are abundant nature sites.