This tour has been a joy. Our time in Greece was saturated with the profound contrast between Greco-Roman culture and the heavenly culture of the Gospel of Yeshua. We

watched firsthand as the economic woes of the world peaked and focused on the Greek people. As their national strike and deadly protests surrounded us, our interviews with the protestors yielded a common, spoken desire for a Superhero to enter the world stage and “fix” everything. What a confirmation of Scripture and another strong example of the headlines “catching up” to the Bible. The news media eventually stumble over what biblical students already know. World history is unfolding exactly as the Bible predicts.

Here in Israel, we see many wonders as we lead 100 pilgrims through the Land and simultaneously tape several TV shows. We are currently working on Acts: Then and Now … the Story Con 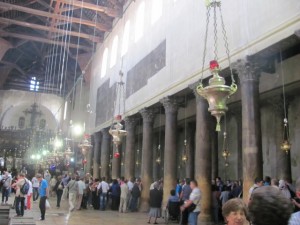 tinues. In this series—also filmed on location in Israel—we highlight Greece and Israel, including interviews with present-day Messianic leaders in Israel. This is a timely and important show. The Body of Christ in Israel is becoming increasingly visible, which is a blessing but also brings persecution. There have been many positive reports in the Israeli news about the Believers in the Land. One unfortunate result: as the “Name above all names” (Philippians 2:9) is on the lips of Jewish people, the resistance to the Gospel also is on some lips. 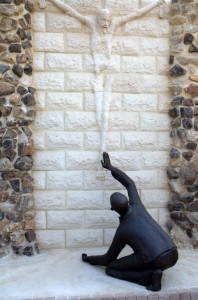 We enjoyed our trip to Arad to tape a show about sculptor Rick Wienecke and were awestruck by the story of Rick’s sculpture “The Fountain of Tears.” In it, he portrays the two most-significant events in Jewish history: the crucifixion of Yeshua and the Holocaust. As unreal as it may seem, Rick has juxtaposed these two iconic events of suffering and created the most challenging piece of artwork I have ever seen. Government leaders come down to this desert location (some at night, like Nicodemus! John 3:2) to investigate this unusual work of art. Watch for it in the upcoming season of Zola Levitt Presents.

There have already been so many incredible memories made from this trip. Thank you for your prayers for our group.