As I write, rockets are falling here in the southern area of Israel. The group Islamic Jihad has taken credit for the most recent barrage. Of course, any Israeli answer “by fire” is what makes the world news. The delegitimizing, demonizing, and disinformation 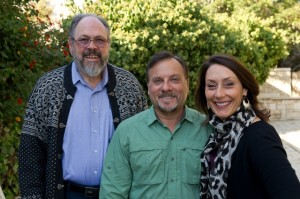 surrounding the news about the Middle East still amazes me. It is relentless, and provides just another reason why we need to be fervent about getting the truth out.

Here is a perfect example: We were taping shows last evening in a Jerusalem park while Israeli families were picnicking nearby. The Jewish families were laughing, playing soccer, and enjoying the sunshine. They would periodically glance over to see what we were doing. Sandra, Zola’s widow, is traveling and filming with us. While Katharine and Sandra were on camera, I walked and prayed, preparing for my next segment. At one point, an Israeli mom stopped me and asked who we were and what we were filming. She assumed we were from CNN or some news network, in Israel to broadcast complaints to the world about “the occupation, the West Bank, and the settlements.” I told her, “No, we are Christians and Jews who love Israel and are making shows to help Americans and the West understand our religious debt to the Jewish people and our need to love and support the Land.” Her eyes welled with tears and, with her voice cracking, she said, “That is so unusual and so beautiful to hear. I wish you much luck.” Later, her friends came by to offer us dessert.

“We heard what you are doing and we want to thank you. We rarely hear of anyone standing on our side like you. Thank you … thank you.”

That is another benefit to being in Israel: We get to see evidence of the goodwill we are sowing among the beleaguered Jewish people who feel that they are otherwise friendless in the world. 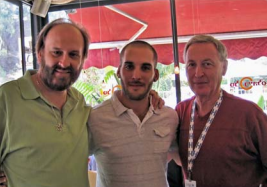 Todd Baker (left) and Harvey Zion (right) with a restaurant manager in Jerusalem who was drawn to the Star of David combined with the cross.

Todd Baker—ZLM’s staff theologian—is here as part of our evangelistic outreach, “To the Jew First.” Traveling with Todd is Zola’s childhood friend, Harvey Zion. Together these two are out every day witnessing and preaching to folks in whatever town the tour is visiting. They are bearing fruit for the kingdom—planting, watering, and watching God bring the increase. Nightly, they regale the pilgrims with stories of the Good News going forth in God’s Land. These two men build bridges of love with their clear presentation of the Gospel.

Traveling around, we spend a lot time with our driver, whom I will call “O.” This tall, strong, young Israeli is a security expert and former Special Forces soldier in the IDF (Israel Defense Forces). He is “wide open”—he has never before heard of Jews following Jesus! As we interviewed pastors in Carmel, “O” was able to hear the Good News in Hebrew from a Sabra (a native-born Israeli). For several hours, he listened to talk about Yeshua and the plan of salvation. We followed up with a gift of some Gospel tracts and a Hebrew Tanach and Brit Hadashah (OT and NT). Katharine asked him if he needed prayer, and several times since then, we have stopped and prayed for him in Hebrew and English with our Israeli friends. Please keep him in prayer as the love of the Lord reaches for him in a profound way.

As you can tell, this season on the frontlines is invigorating and very challenging. I am writing to you from a 4-wheel-drive vehicle, coming up to Jerusalem from the upper Negev Desert. Israel is dark as night covers this tiny country. We will watch to see what the near future holds, although we Believers know the end of the story.

The Israel journey culminated with another high point as Katharine, Sandra, and I 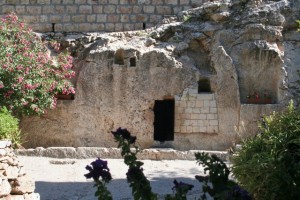 team-taught the Lord’s Supper/Communion at the Garden Tomb. The presence of the Lord was palpable as the reality of the Resurrection was re-established in our hearts. What an amazing end to the trip of a lifetime!

We are looking forward to this next season for ZLM, because with Yeshua – the best is yet to come.