The Battle of Gog and Magog — prophesied in Ezekiel 38-39 — may be forming!

Iranian troops are now in Syria assisting Russia! They are mentioned as “Persia,” along with the Russian Gog leader, in the prophecy of Ezekiel 38 concerning the end-time invasion of Israel.

Wow, wow–this could be the fulfillment of that ancient prophecy! Time will tell.

Libya and Turkey must eventually join the present alliance (see Ezekiel 38:1-6) and, then, if they attack Israel from the north (the Golan Heights), we will be watching the ancient prophecy of Ezekiel 38-39 historically fulfilled.

God said that this battle will specifically take place in the Latter Days within the context of the regathering of the Jewish people into the land of Israel (Ezekiel 38:8). Hold your breath, you eager and watchful students of Bible prophecy, This could be it.

And we know how this battle ends, Beloved: God will supernaturally rain hail, fire, and brimstone out of Heaven to destroy these wicked, anti-Jewish armies so that the unbelieving secular world may finally wake up know that He is the true God, the God of Israel (see Ezekiel 39:6-8).

Iranian troops arrive in Syria ahead of major ground offensive 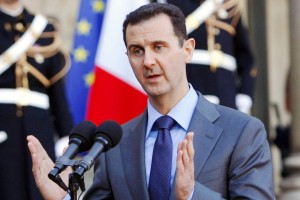 Hundreds of Iranian troops have arrived in Syria in the last 10 days and will soon join government forces and their Lebanese Hezbollah allies in a major ground offensive backed by Russian air strikes, two Lebanese sources told Reuters.

“The (Russian) air strikes will in the near future be accompanied by ground advances by the Syrian army and its allies,” said one of the sources familiar with political and military developments in the conflict.

“It is possible that the coming land operations will be focused in the Idlib and Hama countryside,” the source added.

The two sources said the operation would be aimed at recapturing territory lost by President Bashar al-Assad’s government to rebels.

It points to an emerging military alliance between Russia and Assad’s other main allies – Iran and Hezbollah – focused on recapturing areas of northwestern Syria that were seized by insurgents in rapid advances earlier this year.

“The vanguard of Iranian ground forces began arriving in Syria: soldiers and officers specifically to participate in this battle. They are not advisors … we mean hundreds with equipment and weapons. They will be followed by more,” the second source said. Iraqis would also take part in the operation, the source said.

Thus far, direct Iranian military support for Assad has come mostly in the form of military advisors. Iran has also mobilized Shi’ite militia fighters, including Iraqis and some Afghans, to fight alongside Syrian government forces.

Lebanon’s Hezbollah, which is backed by Iran, has been fighting alongside the Syrian army since early in the conflict.

The Russian air force began air strikes in Syria on Wednesday, targeting areas near the cities of Homs and Hama in the west of the country, where Assad’s forces are fighting an array of insurgent groups, though not Islamic State, which is based mostly in the north and east.

An alliance of insurgent groups including the al Qaeda-linked Nusra Front and powerful Ahrar al-Sham made rapid gains in Idlib province earlier this year, completely expelling the government from the area bordering Turkey. 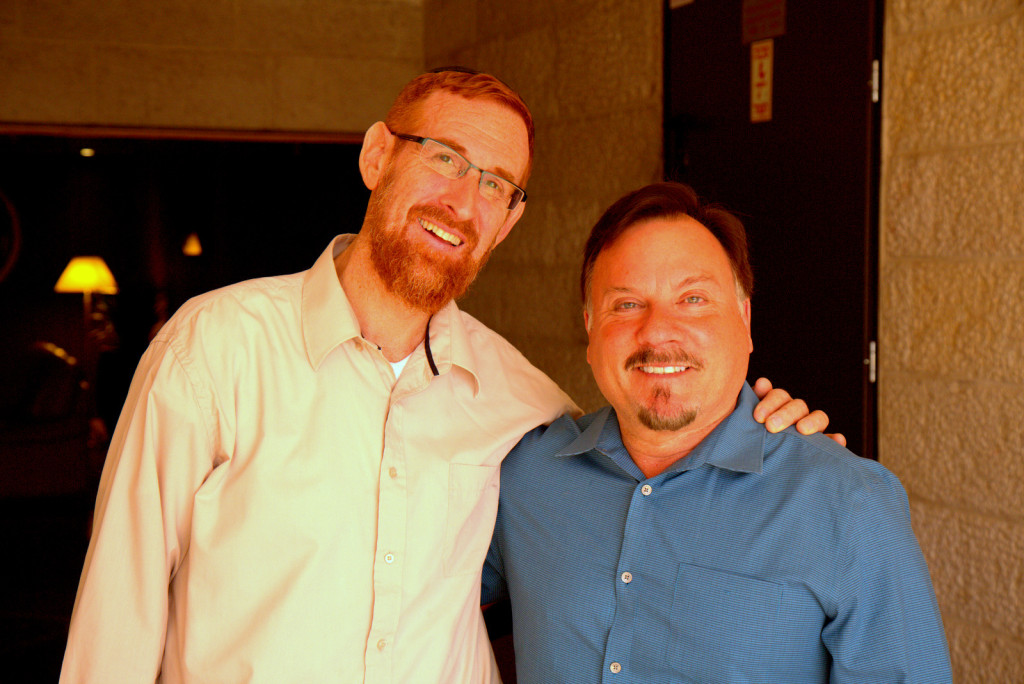 What a privilege for Katharine and me to interview Rabbi Yehuda Glick, who is standing for the rights of Jewish people—and Christians!—to worship on the Temple Mount.

Last fall when we were here, Rabbi Glick was shot four times at point blank range by a terrorist who did not agree that Jewish worshipers have any place on the Mount. Glick’s survival and ongoing recovery is a miracle.

“You will bring them in and plant them in the mountain of Your inheritance, in the place, O Lord, which You have made for Your own dwelling, the sanctuary, O Lord, which Your hands have established. The Lord shall reign forever and ever.”

That is HaMakom (The Place), which is on Mount Moriah. It is the same place where Abraham took Isaac as an offering, the very threshing floor that King David bought from Ornan the Jebusite (I Chronicles 21:24-25), and the place where the Temples stood! No wonder the Moslems built a mosque and a dome here … they knew it is holy to the Jewish people.

Slandered as a “radical” and “agitator,” Rabbi Glick showed during our interview that he is a kind and spiritual man who is on an assignment from HaShem (The Name), hoping for peace and the rebuilding of a “house of prayer for all peoples.”

“Even them I will bring to My holy mountain, and make them joyful in My house of prayer. Their burnt offerings and their sacrifices will be accepted on My altar; For My house shall be called a house of prayer for all nations.”  —Isaiah 56:7

At the Ahava factory by the Dead Sea 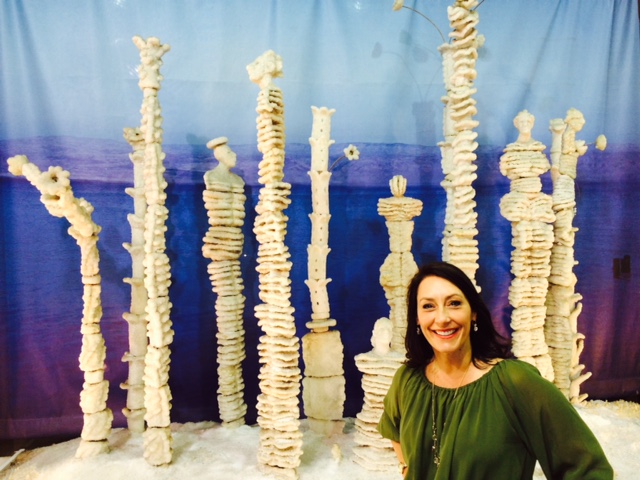 In this picture, Katharine is a living witness standing in front of a unique sculpture made from minerals of the Dead Sea.

My wife conducted a fantastic interview with an Ahava representative, and then we took our camera on a small tour of the factory. Katharine and I actually use Ahava skincare products, which are world renown and of a high quality. A side benefit of using Ahava products is the financial boon to both Israel’s economy and the kibbutz on which the factory is situated and where the employees reside.

Look at that face … designed by God and enhanced by Dead Sea minerals! 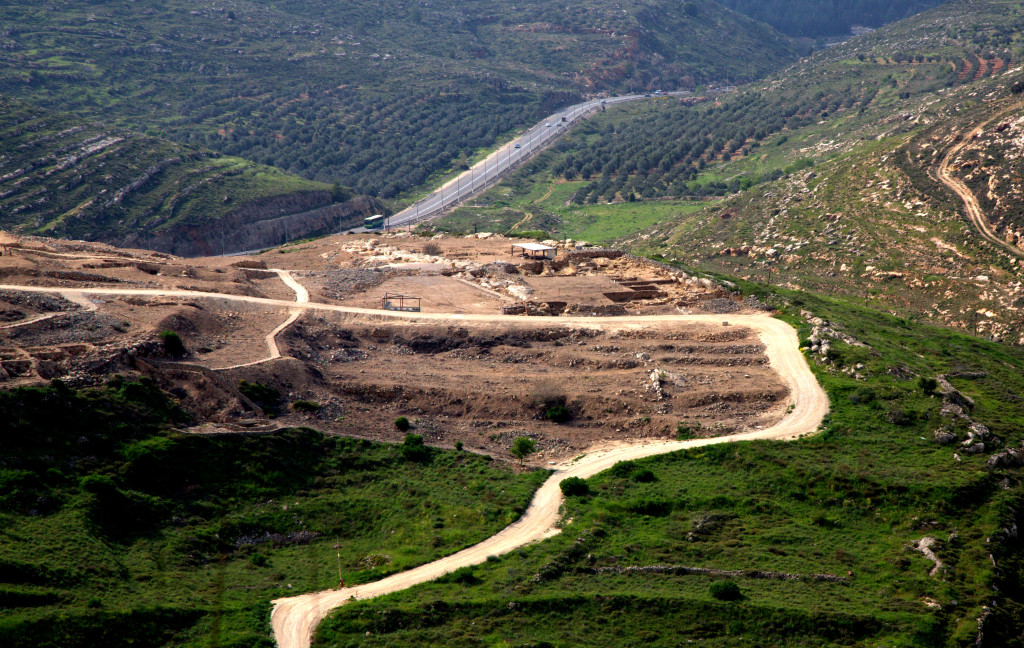 We first came to Shiloh in 2005, before the new exhibit was built with the audio visual explanation of Shiloh for pilgrims. This tremendously significant site is where the Ark of the Covenant rested for 369 years. It is also where the Lord called Samuel through the prayers of his mother Hannah (my mother’s name, too).

When you see this holy place and the modern, reborn community, you will have no doubt about the Creator’s design in restoring the Israeli people and the Land, and calling “whosoever” to be grafted into this miracle! Am Yisrael  Chai — the people of Israel live!

These two photos are enlightening for several reasons. 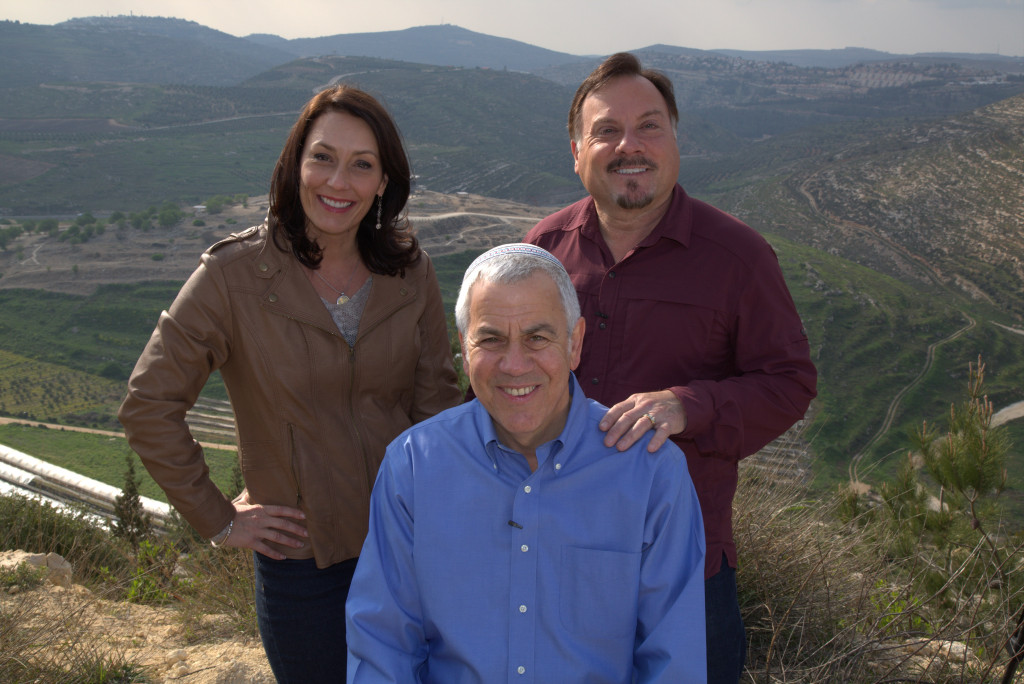 Katharine and Myles with David Rubin 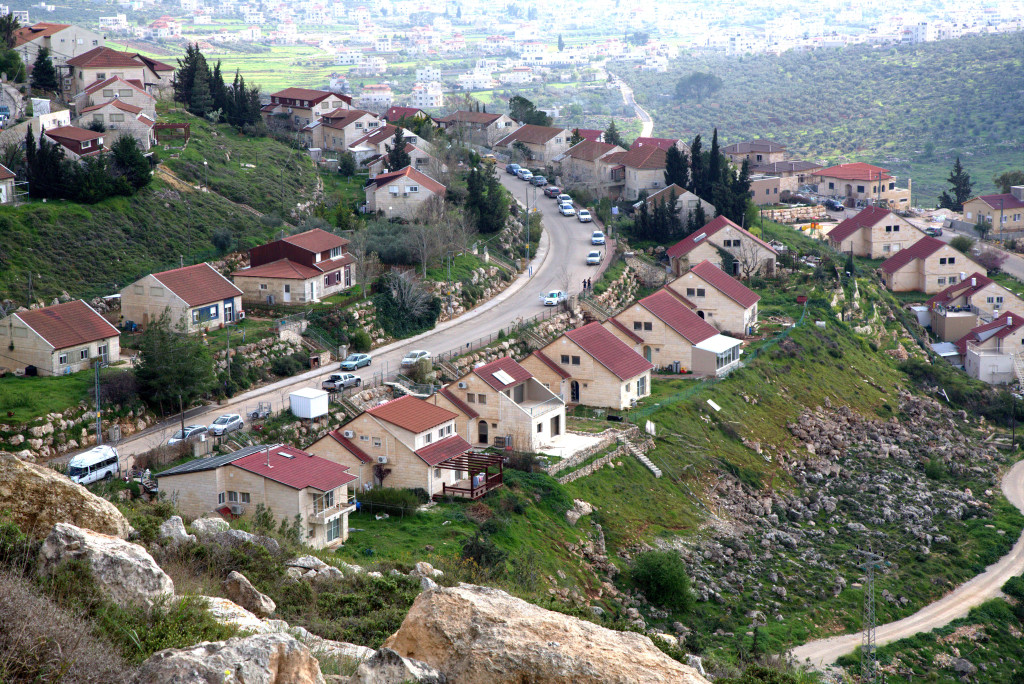 The Bride of Weiss! 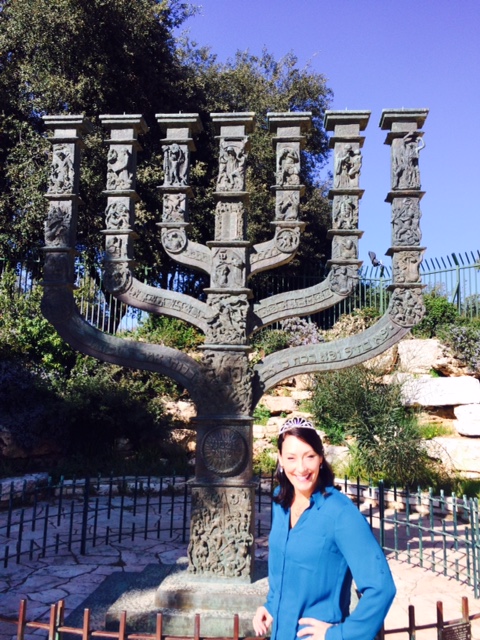 Could there be a more perfect pic of the spirit of Esther? More than anyone I have encountered on my journey, my wife embodies the love for Israel, the hope for the Christian world, and the reach to the lost. Here she is in front of the Knesset menorah whose carvings tell the  history of the Jewish people and our God.

As we look toward Passover and the revelation of Yeshua’s finished work as the Lamb of God, please pray for Israel and for all those who serve the future of the Kingdom of God.

We love you and thank God for our partnership!
—Myles

A synchronized Good Friday points us to the Hebrew roots
of salvation as pictured in Passover.
May the God of Israel bless you and your house
during this season
with a fresh revelation of Yeshua HaMashiach!

With Love, Myles and Katharine 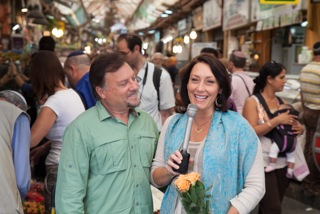 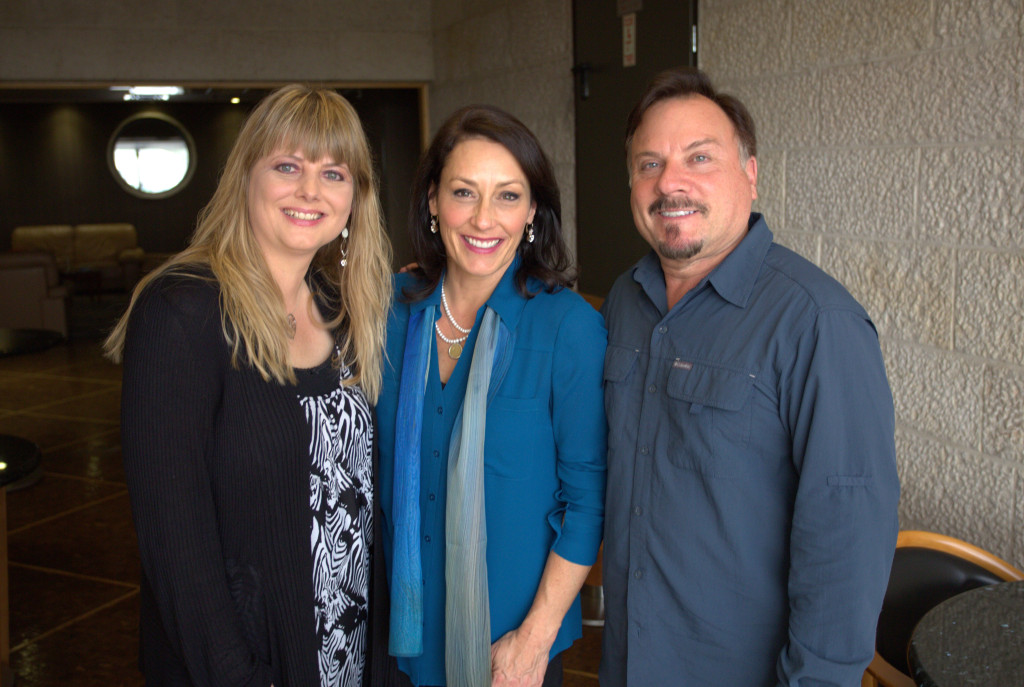 Our new friend, Jane Kiel from Denmark, has been living in, and interceding for, Israel. Living by faith, she has spent hours praying on the Temple Mount, an act that provides a shining example of the rights of the “People of the Book” (Jews and Christians) to worship the one true God on that controversial real estate.

We interviewed Jane about her bold action in the face of Islamic threats: She sang the Shema on the Mount. The central prayer in the Jewish prayer book, the Shema, begins with Deuteronomy 6:4—”Hear, O Israel, the Lord is our God, the Lord is One.”

The Waqf (Islamic guards on the Mount) confronted her, and she respectfully ceased for a while. … But she is back lifting up the God of Abraham, Isaac, and Jacob whenever and wherever she is led.

As a bonus, Jane has become an encouragement for my dear wife, the Bride of Weiss! PTL! 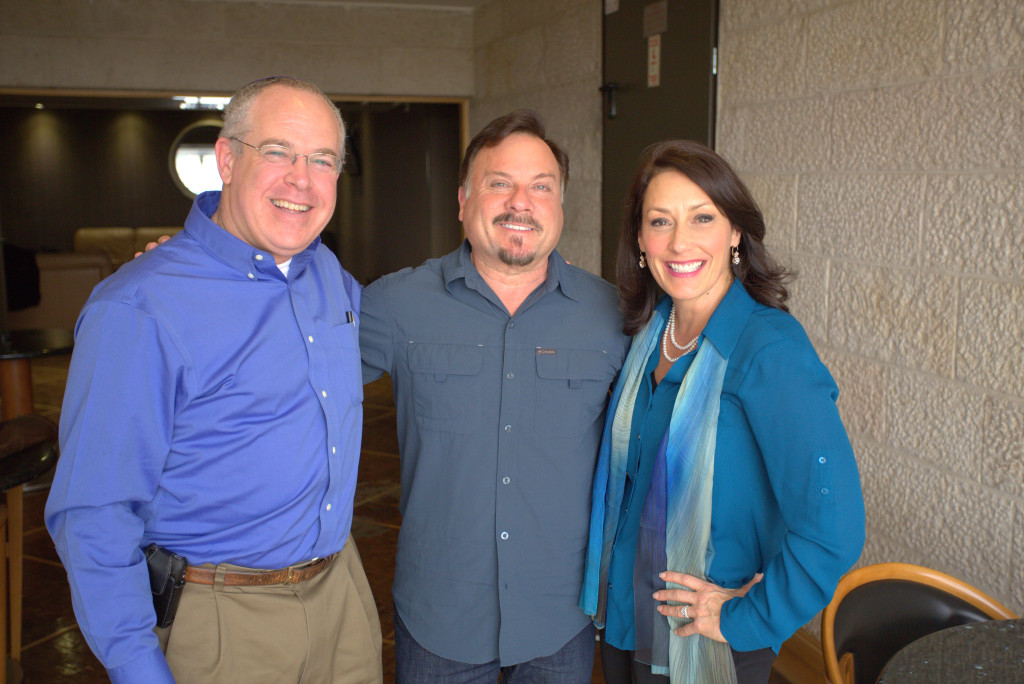 What a picture! The People of the Book cooperating to bless Israel save the lives of those in need. Jonathan reminded us that the blood goes to victims of terror, accidents … AND TERRORISTS when the triage calls for it. Jewish morality compels the ambulance personnel to save the lives of “whomsoever,” which has led to some ironic events: As rockets rained on Israel, the family members of terror leaders were getting medical treatment from Israeli doctors!

We need to TELL THE TRUE STORY of events here. Jonathan has an awesome photo of Israelis lining up to donate blood for the U.S. on September 12, 2001. He counts it as a fulfillment of Genesis 12:3—that through the seed of Abraham all the families of the earth will be blessed. It is a partial fulfillment, along with many other benefits that have come from the Jews: the Torah, the Prophets, the Writings, the Patriarchs, the Law, countless medical and scientific breakthroughs … and Messiah!

ZLM has supported ambulances through our benevolence funds … another way that we work together!

On the “Hill of Evil Council” 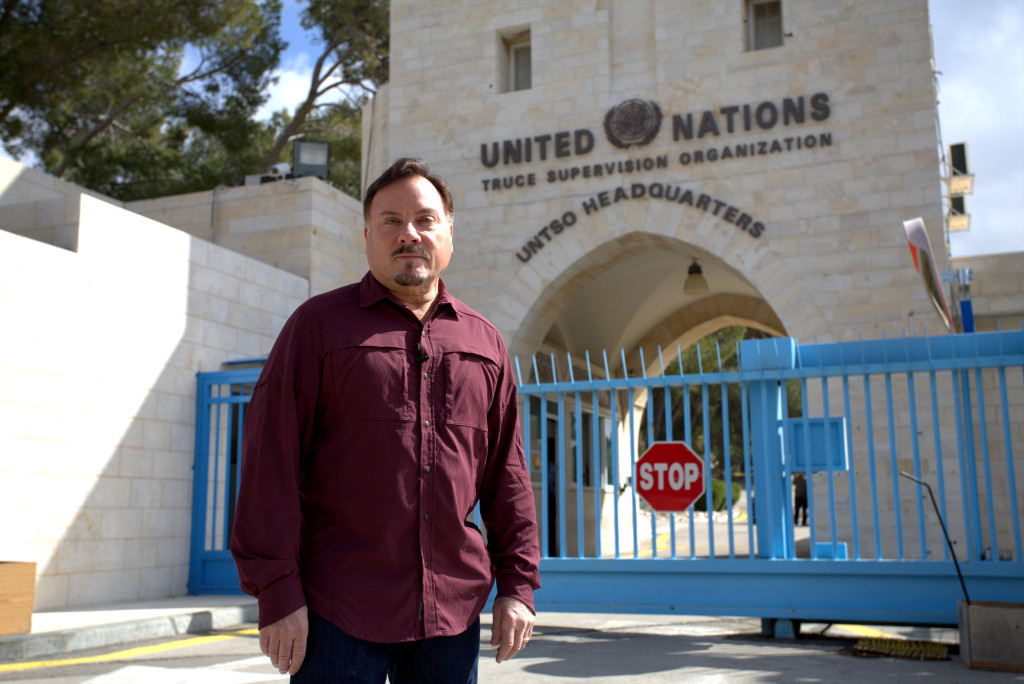 With a wry irony befitting the Master of all creation, the UN’s Truce Supervision Organization (UNTSO) sits on the  hill where tradition says Herod plotted to execute Yeshua. Today, the UN appears to plot repeatedly to “execute” Israel. For example, of the last 28 UN resolutions, 25 were against Israel for “human rights violations.” The UN was heedless to the horrors of Iran, North Korea, and other actual human-rights violators.

The UN is appropriately known colloquially as the “United Nothing.” We Believers know that the only hope of genuine world unity is under the gracious monarchy of Messiah.