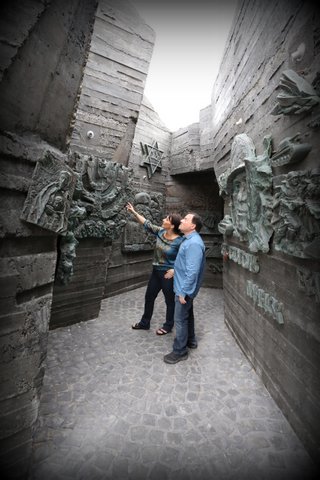 We are standing inside a gift to Israel from Russian sculptors — a Holocaust memorial that opens to giant wings!

Growing up in New York, it was not unusual for me to see numbers tattooed on the forearms of shopkeepers, deli-owners, and random friends and relatives. It seemed a silent but significant witness to us, the younger generation. We would look at the number, look up at the face watching us see it, and move on in our contact. No words were exchanged. The look said a lot.

No wonder General Dwight Eisenhower commanded his media men, “Take as many photos and films as you can, because some day some b****** is going to say this never happened!”

He intuitively saw ahead to our day … and the denial that was forthcoming.

As the Jewish world pauses today to remember the Holocaust, the refrain from deniers continues unabated.  From Iran through the Arab world to Neo-Nazis in the West, there are those who are committed to blotting out the truth of the Nazi era and its profound, near total success at genocide. We watch with bewilderment as the Iranian regime denies the Holocaust while promising another one!

However, in the midst of the dulling noise of denial, a new force is rising in the earth. It is the sound of those Christians who are standing with Israel and the Jewish people. These believers in the God of Abraham stand with the natural children of Abraham and proclaim, “Never again!” Regardless of epithets hurled at them by mainstream media, politicians, and pundits, these champions are the spiritual offspring of Oskar Schindler, Corrie ten Boom, Raoul Wallenberg, and Dietrich Bonhoeffer. 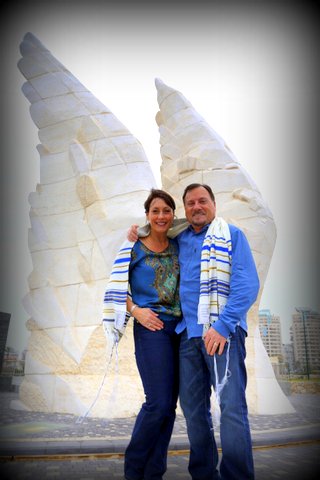 Out from the darkness of the tunnel that symbolizes those Holocaust years and into the Psalm 91-promise of God over the Jewish people.
Life overcomes death, light overcomes darkness!

The people of Israel and those Jews who recognize the miracle of the Jewish State’s existence stand in awe of this new era.

It seems to be a transitional season between where we are now in history and the soon-coming Messianic Age. The destiny of Jews and Christians are merging in many unforeseen ways.

Of course, God saw it all ahead of (and outside of) time. He showed Ezekiel that the graves of Europe would open and the people would be planted in the Land, and then clean water would be sprinkled on them. Clean water is the spiritual renewal that has begun, as Israelis open the Torah and the whole Tanakh, and some of them are seeing the Messiah! Christians are sharing the Good News, some with wisdom and cultural sensitivity.

In the middle, between the “gentile-born, grafted-in Christians” and the modern Orthodox, “Bible-believing, living-in-the-heartland” Jews, stand Messianic Believers.

Misunderstood by nearly everyone, this small (in numbers)  cadre of “both/and” folks continues to live as Jews while honoring Yeshua (Jesus) as Messiah.

Naturally, we live with varying levels of halachah, kashrut, and shomer shabbat … as does the rest of our Jewish mishpochah. Some of us are extremely observant, and others of us are less so.

As you may have heard, “two Jews, three opinions” — we are a people who have many opinions and approaches to living the Jewish life. That characteristic comes with us into our life with Messiah. We have some very liturgical synagogue-style congregations, some small groups that meet in homes, large “Jewish-flavored churchy” meetings, and every thing in-between. Very Jewish is our multicolored tapestry of ways to worship the one true God of Abraham, Isaac, and Jacob and His Mashiach, Yeshua.

In Israel, the Messianic community is engaged with the culture in creative and honoring ways. Their sons and daughters serve with distinction in the IDF and other armed forces. Here in the Diaspora, the Jewish Believers have as many lifestyles as Jews anywhere, from extremely observant to casual commitment, from synagogue-like to church-like.

We truly are a peculiar people, as Shimon Kefa (Peter) told us in his epistle, and often find ourselves being mislabeled and misunderstood. Apparently, we are not Jewish enough for some and too Jewish for others! Oh well, the servant is not greater than the Master! As the old Yiddish proverb goes, “If God lived on Earth, we’d break His windows.”

But the Messianic community is a bridge.

A bridge between Christians and Jews, and a living testimony that one can remain Jewish and follow Yeshua.

The Messianic body in Israel is a first-fruits offering to the Lord. Its members are standing at the finish line, waving sheaves before God, encouraging the whole nation to receive Yeshua and to cry out, “Baruch HaBa B’Shem Adonai! … Blessed is He who comes in the Name of the Lord!”

So, in the midst of this somber memorial, we have cause to celebrate and rejoice in the soon-coming of the Messiah Yeshua!

The Lion of the Tribe of Judah is coming soon, to a Jewish Jerusalem, to rule and reign, and for a thousand years!

This entry was posted in Holiday Message, Myles Weiss. Bookmark the permalink.