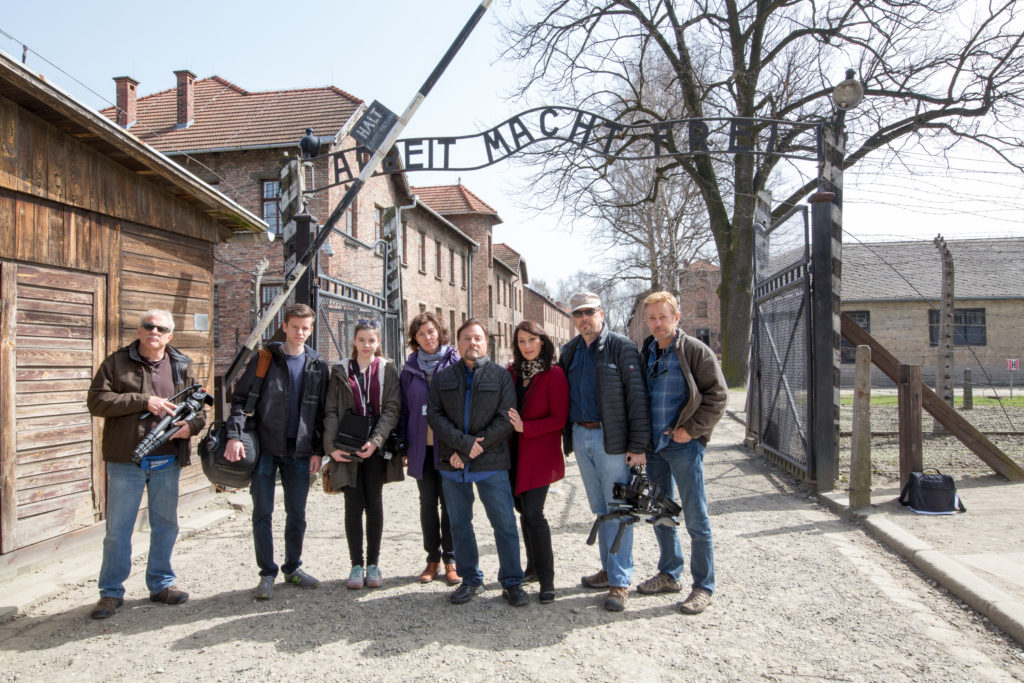 Rev. and Katharine Weiss (4th and 3rd from right) with other members of the production team at the infamous Auschwitz-Birkenau death camp / photo: Ken Berg – Zola Levitt Ministries (far right)

This past spring, the ECA’s (Evangelical Church Alliance)’s Rev. Myles Weiss and his wife, Katharine — of Zola Levitt Ministries (www.levitt.com) and co-hosts of the weekly television program Zola Levitt Presents — led a television production team to film the series Beauty for Ashes on location in Poland and Israel. Set to air in September (2016), this labor of love comprises eight programs and includes footage and on-site Bible-based teaching from Auschwitz-Birkenau, interviews with Holocaust survivors, and further teaching from reborn Israel that features the nation’s marvel of agriculture and artistic breakthroughs, and interviews with high-tech leaders from of the land of Abraham, Isaac, and Jacob.

The haunting words ARBEIT MACHT FREI (German for “Work sets you free”), shown in the photo above, mockingly greeted the doomed inmates who were systematically murdered at the concentration camp. This phrase originated in the title of an 1873 novel written by Georg Anton Lorenz Diefenbach, a German nationalist, novelist, philologist, lexicographer, librarian, and pastor. Diefenbach’s novel expressed the theme that degenerates could redeem their virtue through labor, and these words from its title found a diabolical and convenient use by Nazi perpetrators 70 years later.

Myles and Katharine invite you click on www.GG2GG.org — Golden Gate to Golden Gate — to learn about their various ministries and greater vision, in their words, “dedicated to bringing the message of God’s heart for Israel and the Jewish people into alignment with the Church. Our message is proclaimed through television, in print, online, and via our two Messianic Congregations, Beth Shalom and Beit Abba.”  Myles and Katharine ask for your prayers and support. They are available for speaking opportunities; their contact information is available on the Golden Gate to Golden Gate website, www.GG2GG.org.

This entry was posted in Breaking News. Bookmark the permalink.