The famed Bahá’í Gardens in Haifa 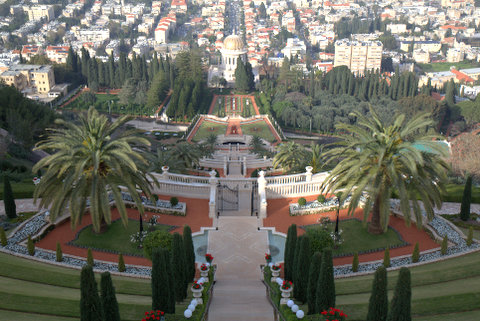 The Bahá’í Gardens in Haifa

The Bahá’í Faith: a prime example of the attempt to create a universal world religion that eclipses Yeshua as “Ha Derech, Ha Emet v’ Ha Chaim” (the Way, the Truth, the Life)!

Seeming more benign than other “paths,” this 19th-century syncretic movement still misses the mark and led the way for the global religion arising today.

Watch and Pray!
Myles and Katharine

The Bahá’í Gardens, located in the heart of Haifa, comprise a staircase of nineteen terraces extending all the way up the northern slope of Mount Carmel. The golden-domed Shrine of the Báb, the resting place of the Prophet-Herald of the Bahá’í Faith, stands on the central terrace, looking across the bay towards ‘Akko.

While different parts of the gardens offer a variety of experiences, they speak in a common language of graveled paths, hedges and flower beds groomed and nurtured by dedicated gardeners. The gardens frame panoramic views of the city, the Galilee Hills and the Mediterranean Sea.

The Bahá’í Faith believes: Throughout history, God has sent to humanity a series of divine Educators—known as Manifestations of God—whose teachings have provided the basis for the advancement of civilization. These Manifestations have included Abraham, Krishna, Zoroaster, Moses, Buddha, Jesus, and Muhammad. Bahá’u’lláh, the latest of these Messengers, explained that the religions of the world come from the same Source and are in essence successive chapters of one religion from God.

Bahá’ís believe the crucial need facing humanity is to find a unifying vision of the future of society and of the nature and purpose of life. Such a vision unfolds in the writings of Bahá’u’lláh.

This entry was posted in Katharine Weiss, Myles Weiss. Bookmark the permalink.